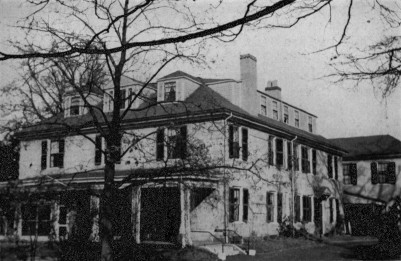 THIS property was part of the large Oliver grant of 160 acres made to Thomas Oliver in 1638 and 1641. As early as 1650 this whole estate had been sold to John White, first settler of the White family in Muddy River, and it continued in this ownership until the first quarter of the nineteenth century.1 Before 1822 land from the estate of Thomas White was sold to the Reverend Henry Colman, on the western corner of which the present stone house was built by Joseph Sewall who moved into it on June 4, 1823.2 It was occupied by his family until 1834 when purchased by John Tilson, after which it had many owners. The front part of the house has been modernized during the last fifty years, but the rear still retains the simple woodwork and mantel pieces of the 1820s.

Miss Woods gives a very attractive picture of this part of Brookline during the first half of the nineteenth century before the opening as a public way of the southerly end of Cypress Street, which was only a narrow lane leading from Walnut Street through the Sewall property to the woodland in the rear. From where the lane stopped a path led up the hill and gave access to Jamaica Pond. Chestnut Street had not yet been laid out, and the whole region was a wooded tract traversed by a brook having a crude foot bridge of logs. With the opening of Chestnut Street and the continuation of Cypress to connect with it, the whole section lost its rural charm.3