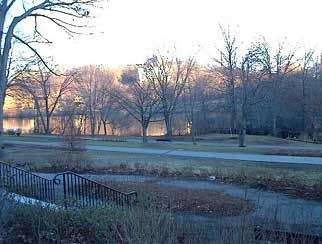 Friends of Leverett Pond was the second of the Town of Brookline’s Park Friends Groups created as a park advocacy organization in the 1970s. Formed in 1978 as a sub-committee of the High Street Hill Association, it has worked to improve the condition of Olmsted Park and to increase awareness of issues of park stewardship.

Friends of Leverett Pond has held neighborhood celebrations, clean-ups, and pruning workshops as well as advocating whenever possible for the historic restoration of the Park and the entire Park system. The leadership from FoLP was involved with the writing of the Emerald Necklace Masterplan and has gone on to provide leadership for the beginnings of the Emerald Necklace Conservancy, and to contribute to the citizens’ participation in the Muddy River Restoration Project.

FoLP has been active participants in the implementation of the Master Plan in Olmsted Park. In 1997, about $300,000 was expended to complete Phase 1 — removing automobile traffic from Riverdale Parkway and creating bicycle and pedestrian paths in its place between the Chestnut Street rotary and Willow Pond Road.

In 1998, Phase 2 which continued the bike and pedestrian paths from Willow Pond Road to Washington Street (Route 9) was completed. Plantings and regrading of eroded slopes were included. The cost of Phase 2 was about $500,000, funded through the federal Community Development Block Grant funds administered by the Town of Brookline. 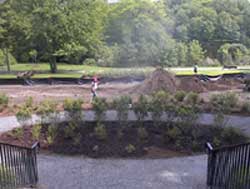 In addition, under a $100,000 Mass. Historic Landscape Preservation Program grant from the Mass. Department of Environmental Management, the area below Allerton Street (known as the Allerton Overlook) has been re-created following Olmsted’s original intent to provide a vista across the widest portion of this part of Olmsted Park. In 1999, benches were placed on either side of the rebuilt granite stairway, and two beech trees were planted at the ends of the semicircular path.

In 2002, an irrigation system was added to water the planting beds near the Overlook.

Funding for the restoration of Willow Pond and the “babbling brook” is included in the Brookline Capital Improvement Program.

All of these improvements show respect for Olmsted’s design and reflect intensive neighborhood participation in restoring a national treasure.

On June 15, 2003 at Olmsted Park, FoLP held a 25 year celebration of its citizen activism and the restored Park. Here’s the invitation (pdf) and press release (pdf).

Some photographs of Olmsted Park before restoration can be found on the Emerald Necklace page (scroll down) at Friends of Pinebank. The site also offers a one page illustrated overview of the Muddy River Dredging Project.