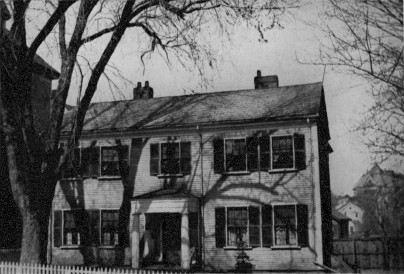 THOMAS LEVERETT was one of the first “Absentee Landlords” of Muddy River, having received grants totalling one hundred seventy-five acres on the northerly side of what is now Walnut Street in 1638 and 1641. At his death in 1650 he left his land to his widow, and at her demise in 1657 all her property in Muddy River passed to her son Sir John Leverett. It seems apparent that before 1674 this was owned by Thomas Gardner, although there is no court record of its transfer. After Thomas Gardner’s death in 1689 it was inherited by is son Joshua. Before 1746 Major Edward White, who had inherited land on the south side of Walnut Street, purchased the lower end of the Leverett-Gardner farm which extended from about the intersection of High and Walnut Streets half way to Cypress Street. At Edward’s death in 1769 his son the Honourable Benjamin White, member of the Governor’s Council, inherited the land, but at his death in 1790 his estate was found to be insolvent. His son Thomas, however, kept six acres at the lower end of Walnut Street until his death in 1817, and his heirs continued to hold them until 1846.1

At some unspecified date, in the vicinity of 1798, this house was built by Eliphalet Spurr who owned a line of stage coaches which ran daily from the Punch Bowl Village to Boston. Later Mr. Spurr sold his business to Azariah Fuller, but whether or not Mr. Fuller also took over the house is not recorded. The next occupants of note were Thomas and Eliza Aspinwall who purchased it in 1817, and lived there for many years. They were the son and daughter of Colonel Thomas Aspinwall. Thomas was a deaf mute, but was active in village life, managing to make himself understood by signs in spite of his handicap. He and his sister died within a year of each other in 1842 and 1843, and after their deaths the house had many different occupants.2 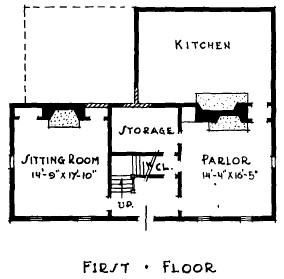 Gray clapboard house with white trim and pitch roof. Lapped clapboards, porch with columns probably a later addition.
Dentilled cornice which is repeated in the interior. When built the house was only one room deep, with the kitchen in an ell on the easterly side. Present ell at rear added about seventy-five years ago, probably porch and marble mantel pieces were installed at the same time. The lower rooms have unusually high ceilings.

STAIRS. Original treads and risers. Ascends at left and crosses with two landings at rear of small entry.
Scrolled raised ornaments on end of each step.

Woodwork: One board dado with moulded top. Original six panel doors, panelled on both sides, one side having sunk panels,
the other raised panels with moulded edge. Simple cornice, boxed corner posts exposed. New ceiling.

Fireplace: White marble with a grate.

ROOM AT REAR OF STAIRS:
A room of this sort is often found behind the stairs when the stairs are placed in the front entry in a house of this period.
It may originally have contained an outside door, or at least a window, it is now connected with the later rear addition. Its use was probably as a closet or storeroom, as present owner can remember when it was fitted all around with old hooks for hanging. Now has a small cupboard with shelves, and panelled doors with H hinges fitted into the space behind the east parlor chimney.

KITCHEN:
It seems probable that the original kitchen was in the same location as the present one, but originally this would have been an ell. The wall behind the stove is now bricked up, but owner remembers when ovens were exposed. This chimney is larger than the other, which indicates an extra flue.

SOUTHEAST CHAMBER: This is the handsomest room in the house and has fine woodwork.
Woodwork: Chair rail, no dado. Original panelled doors, fine heavy cornice with reeding surmounted by dentilling.

Woodwork: Much plainer than in the west chamber. Original panelled doors, no dado or cornice.

CONCLUSIONS:
Considering the simple exterior the inside of this house exhibits unexpectedly good woodwork. It is an interesting example of a transition house, as its raised panel doors, HL hinges, and dentilled cornices appear to be earlier than one would expect to find in a house of its period.