John F. Edwards (perhaps in conjunction with Paul Schulz) was hired in 1853 to design a new school on Pearl Place in Brookline Village. It stood at the corner of Brookline Avenue and Pearl Place. Originally two rooms, it housed both primary and intermediate schools. An ell of two stories with two more rooms, similar to the existing ones, was added in 1856. 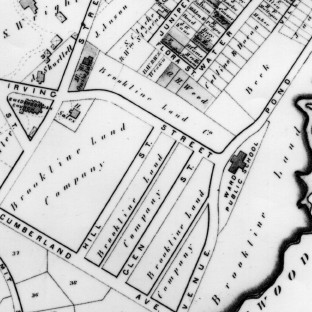 In the summer of 1863, this building was moved to the old Ward’s Farm area on Pond Avenue (at the foot of what is now Allerton Street) on land previously owned by the Brookline Land Company. At the same time, a wing was added bringing the total to six rooms. It was reported that the new location was pleasant and airy as well as away from all evil influences. In 1868, a sixth grade room opened. In 1871, the lot was graded and fenced and outhouses were built. Charles Kirby, the architect of the original town stable, made designs for additions and alterations in 1873. Two new schoolrooms were added with a large and airy hall into which all classrooms opened. The double staircase in this hall were widened. This addition was needed to take students from the overcrowded Boylston Street School.

In 1881, Olmsted recommended removing this building in his plan for the Emerald Necklace. The building was vacated in 1888, the students sent to Lincoln School in May, and the school was razed soon after.