Since 1979 my husband and I have lived in the “weird” house
on High Street with the gargoyles and sunflowers.
It was designed by Clarence Luce and was built in 1880 for Mr. Edward Stanwood,
publisher of “Youth’s Companion,” a popular periodical.
Queen Anne Revival in style, its exterior explodes with decorative details
composed from a variety of materials including brick, rusticated granite,
terra cotta, slate and fish scale shingles.
Elaborately cast designs known as grotesques adorn the main façade while
fantastic carved wooden gargoyles peer down from the eaves.
It its time, the house became known as “the house covered with sunflowers and devils.”

When we moved into the house, we were told that there were four original murals
underneath the wallpaper in the front hall, and that these murals were done
by the same artist who had designed a stained glass window near the front door.
Some research led to American artist Thomas Wilmer Dewing (1851-1938),
who was born in Boston, studied in Paris and later worked in New York and Boston.
He is well-known for depicting women of the day in elegant dresses,
often in pre-Raphaelite style. We learned that Dewing was also commissioned
by the Stanwood family to paint an oil, called “The Spinner,”
to be hung above the large fireplace in our parlour room.
The year after the house was built Dewing showed both the stained glass window
(executed by one Frank Hill Smith) and “The Spinner” at the St. Botolph Club in Boston.
It was fun to discover this, as my husband is a member of this club!
Unfortunately, “The Spinner” now is owned by the Brigham Young University Museum,
having been sold by the heirs of Mr. Stanwood. 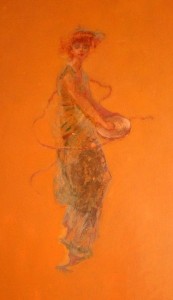 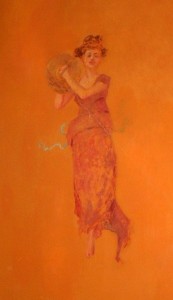 To learn more, we contacted Dr Susan Hobbs, a research associate,
who had been working on a Thomas Dewing catalog raisonné for the Smithsonian.
She came to see the stained glass, and asked us to contact her if the paper
was ever removed from the hallway.

When we were ready to begin the restoration project we contacted
the Society for Preservation of New England Antiquities who put us in touch
with Sara B. Chase, Preservation Consultant.
She did some exploratory work on the murals underneath the wallpaper,
as well as on the ceiling and cornice paints. She then removed the layers
of wallpaper, and the surfaces were cleaned.
Two Dewing standing ladies appeared, one on each side of the hallway,
classically draped and holding cymbals. 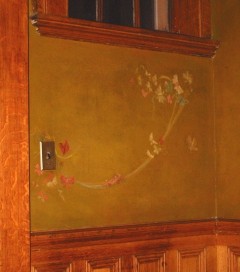 Of great surprise was the decoration uncovered in the vestibule.
There the entire area was stenciled with yellow sunbursts overlapping
on the light olive ground.
On the south wall is a whimsical decoration consisting of butterflies,
blossoms and a swag with a tiny faceless nude reclining.
Sara subsequently restored the rest of the hallway (mainly the ceiling and cornices)
to the original paint colors and decorations with the help of a young decorative painter
named Lars Michelson (he now has a
restoration business on Cape Cod).
Dr Hobbs was delighted to see the Dewings when she came up to Boston!

We love living in the house “of sunflowers and devils”
and try hard to keep it in the “spirit” of 1880.