While the properties previously discussed were mainly built by the Philbrick family, the other side of Pill Hill was developed largely under the auspices of the Swedenborgian Church and the Brookline Land Company. Established in 1787, the Swedenborgian Church was founded on the religious philosophy of Emanuel Swedenborg, an eighteenth century Swedish scientist and inventor. In 1862, the Swedenborgians built a church, (now occupied by the Latvian Lutheran Church) on the corner of Upland, Irving, Allerton and High streets. This Gothic Revival structure, designed by Ware (of Ware and Van Brunt) and Edward Philbrick, is one of the few non-residential buildings in this area. The simple rectangular chapel and 3-sided apse are constructed in Roxbury pudding stone and trimmed with limestone. The Stick style bracketed porch and porte-cochere were added in the 1870s. 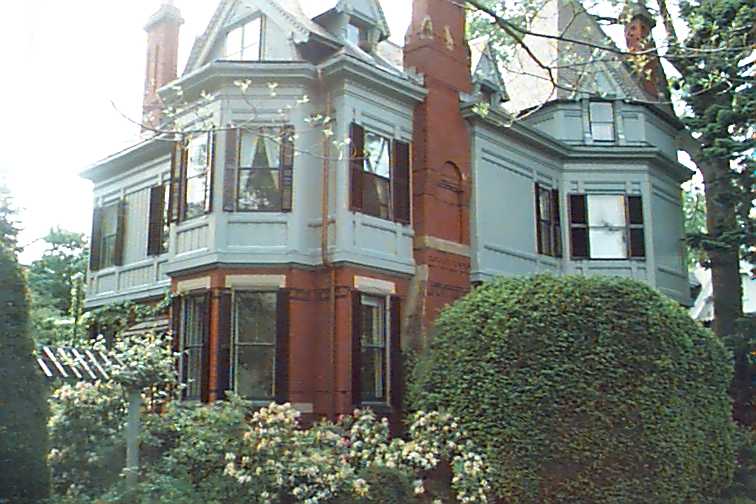 One of the founding members of the Swedenborgian Church, James Edgerly, built 39 Irving Street in 1875. The brick of the first floor extends upward to a prominent ornamented chimney while the overhanging second floor has a wall surface of vertical boarding. Accented with Stick style framing, the structure reflects a picturesque Queen Anne quality with its tower, peaked dormers, and mixture of materials. Mr. Augustine Shurtleff was another generous founder of the Swedenborgian Church. 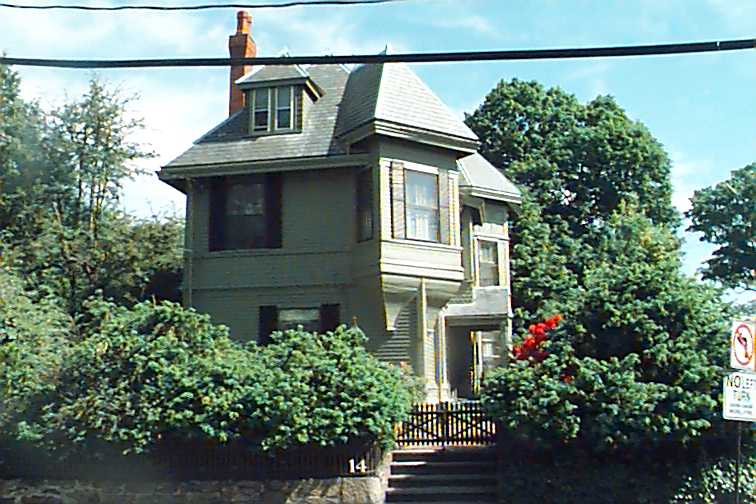 Beyond the row of evergreens, one of his houses remains at 14 Allerton Street. Built circa 1882, this is a good example of Queen Anne style architecture. The complexity of its exterior massing with towers, peaked slate roof, tall chimneys and dormer windows, is typical of many domestic buildings of the era and exhibits the restless activity of Victorian design. Notice the four patterns of wood surfacing–clapboards, scalloped and hexagonal shingles, and paneling–which further break up an already complex facade.

The very name, Queen Anne, suggests the eclecticism of its originators. It was coined in England to describe buildings that were supposedly inspired by the transitional architecture of the pre-Georgian period when classical ornament was grafted onto buildings of basic medieval form. The Queen Anne style plays on contrasting materials: first floors are often molded brick or stone; upper floors are of stucco, clapboard or decorative shingles. Roofs are irregular, often with turrets or second-story projections, and gable ends are ornamented with half-timbering or stylized relief decoration. Banks of casement windows are typical, and upper panes are frequently outlined by stained-glass squares. Just as verandas and balconies opened houses to the outdoors, interior plans allowed for large, open spaces.

A more extravagant Queen Anne building stands at 76 High Street designed by Clarence Luce in 1880 for Edward Stanwood, chief editor of Youth’s Companion. A variety of materials are used, including brick, rusticated granite, terra cotta, slate, and fish scale shingles. Similarly, several large wooden panels with elaborately carved designs (mastic) adorn the main facade. While the carved dragons and grotesques delighted the architect, it embarrassed Mr. Stanwood who became known as the man “whose house was covered with sunflowers and devils.”(2) 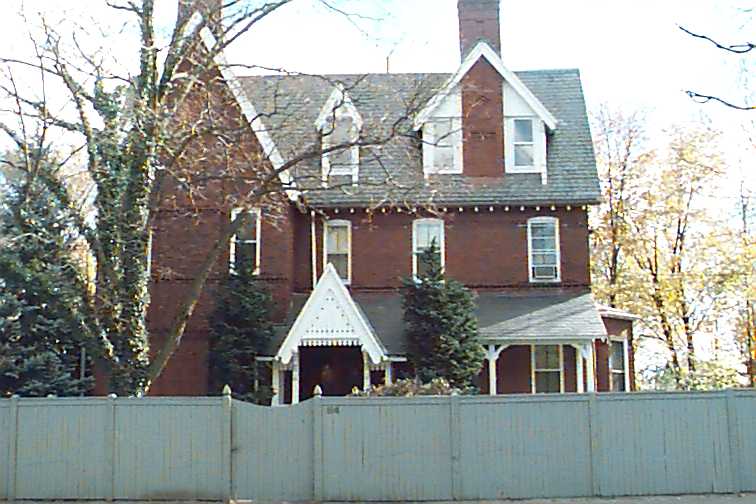 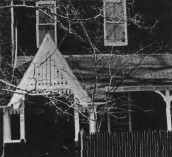 As recorded in a drawing of the American Architect and Building News (1877), 84 High Street was designed by Weston and Rand for John D. Runkle, once the President of M.I.T. It displays a careful balancing of vertical and horizontal features. An irregular plan of elaborate belt courses in the brickwork are set against the extremely steep slate roof, tall prominent chimneys and corner turret. Identical to porch deails of the Swedenborgian Church, stick work ornaments the porch and dormers. 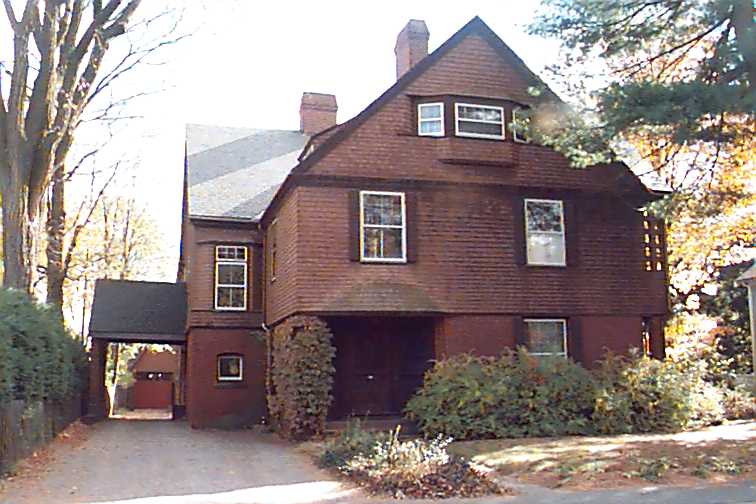 On the other side of the Runkle home stands a brick and shingle house, 92 High Street. Built in the late 1870s for Thatcher Loring, the treasurer of National Dock and Warehouse Co. in Boston, the most striking feature of this house is its paneled oak entranceway with small paned windows and bull’s-eye motif.

Next door, 100 High Street, was built for Cadwallader Curry, a Brookline Savings Bank Commissioner. Notice the half-hip dormer, the ornamental slate roof, and the clapboards overlaid with Stick style boarding. 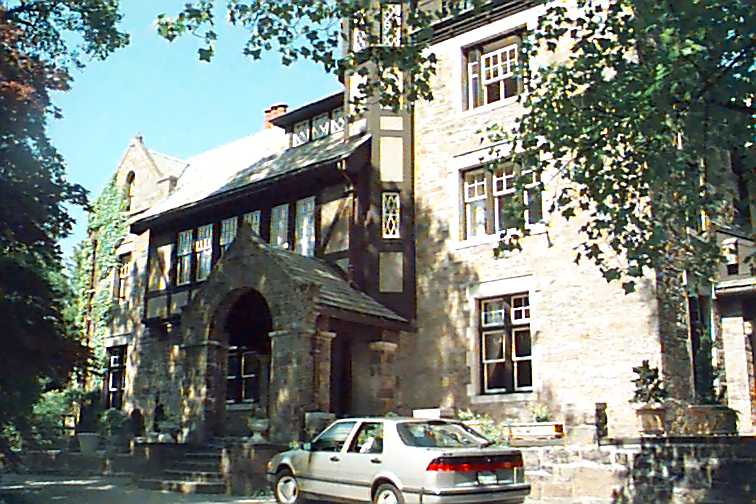 Across High Street is number 99, built in the 1860s for John W. Candler, who was a Representative in the U.S. Congress, as well as a director of the Brookline and Aspinwall Land Companies. Although the house originally had a mansard roofline, alterations from 1907 which include towers, pointed gables, and a half-timbered facade now give the edifice a medieval-Gothic appearance. 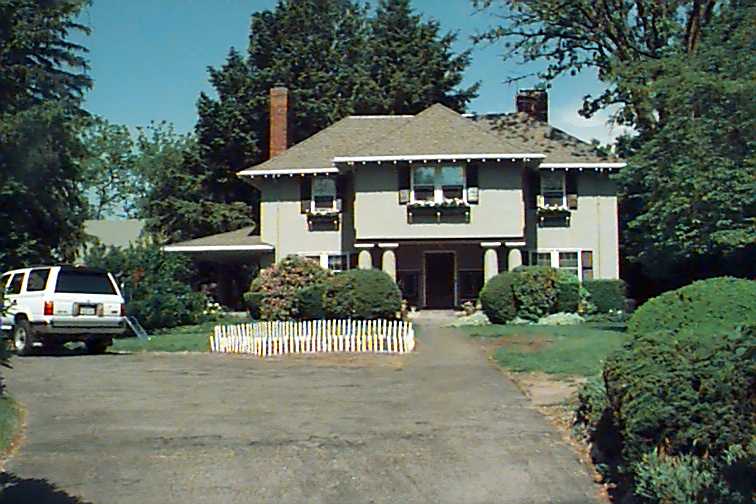 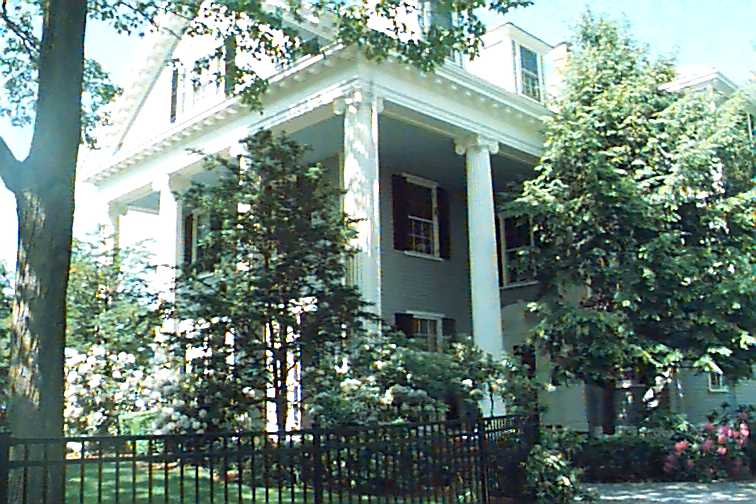 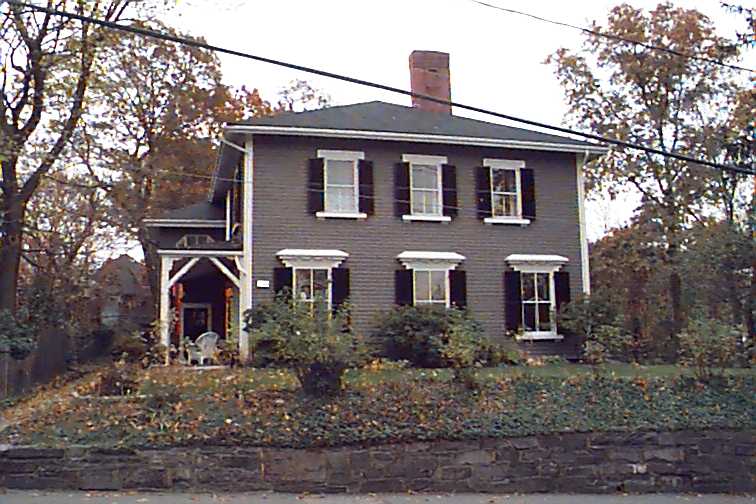 At 127 High Street is a stucco hipped-roof house designed in 1909 by Edwin Lewis, Jr. for Prescott Hall. Next door at 135 High Street is a large Greek Revival house built for Prescott Hall’s father between 1871-74, the large portico being a later addition. A practicing lawyer, Prescott Hall was also an author on economics, eugenics, and immigration. His conservative policies regarding immigration restrictions can be contrasted with the pro-abolitionist activities of his parents’ neighbors who had lived across the street. According to local legend, the house at 138 High Street was another station on the underground railway.