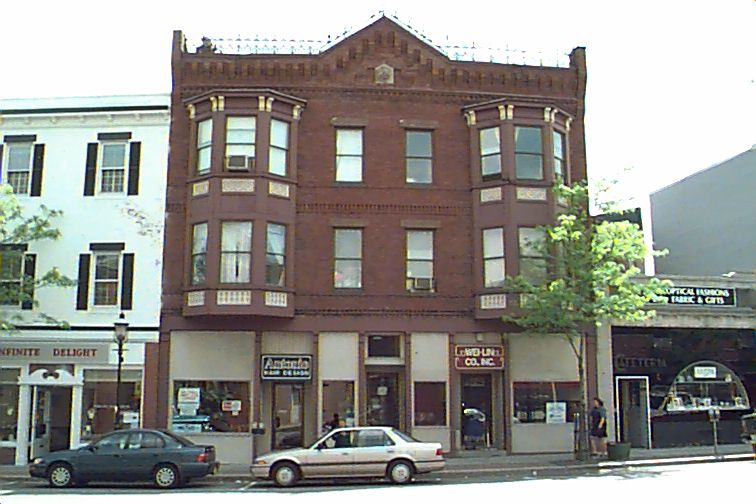 Further down at 280-284 Washington Street is a building constructed by Reuben A. Chace in 1875, which was known as the ‘Reubens’. Also the first home of the Brookline National Bank (now the Brookline Trust Company) it is another fine example of Panel Brick architecture with its stepped corbel table along the cornice, decorative brickwork between the floors, and iron cresting along the central gabled roofline. 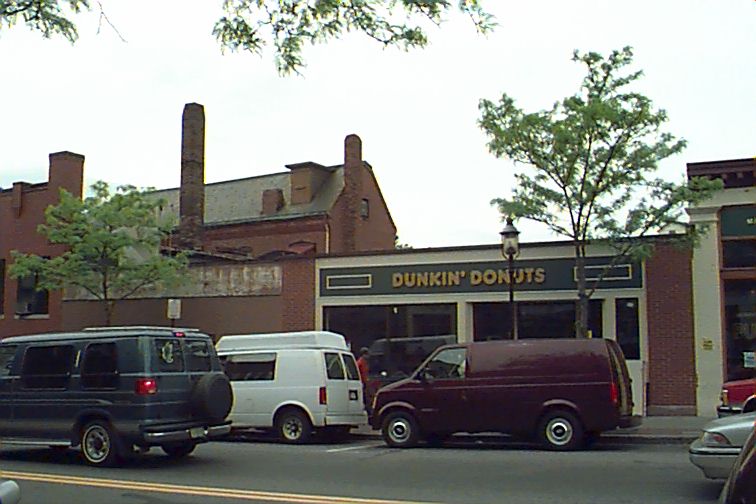 The intersecticn of Harvard and Washington streets has a long and interesting history. During the eighteenth and nineteenth centuries, the Dana Tavern stood here as a famous stopping place for farmers who came to Boston from the surrounding countryside to sell their produce. In the open space in front of the tavern were the town scales. When the Dana Tavern was destroyed by fire in 1816, a Baptist Church was built upon the site. In 1855 John Panter purchased the church and soon thereafter altered it into a business block by moving it to a position parallel with Harvard Street and constructing stores beneath it. Harvard Hall, the pedimented building in the old photograph (see page 33), was soon erected on the pivotal intersection site. Finally, in 1905-6 the present edifice was constructed and became the home of Rhodes Brothers grocery business. A close look at the hip roof two-story structure which is now part of the Li’l Peach complex shows it was originally a separate building. Built approximately twenty-five years earlier than the one-story section, it was the former Village Post Office. 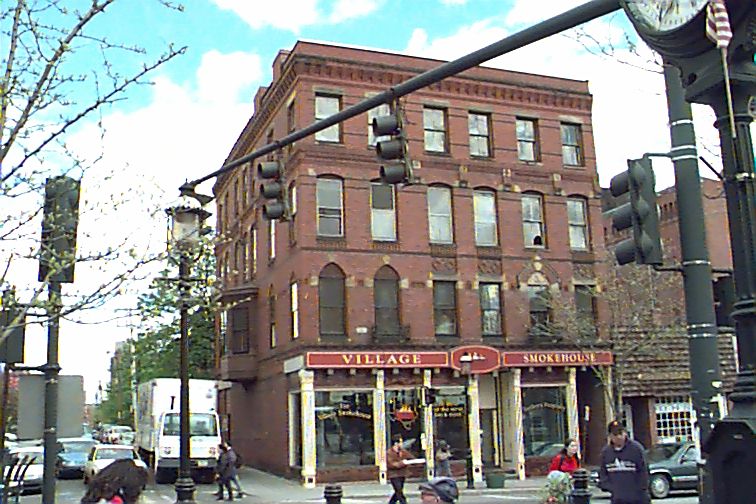 Across the street at 7-9 Harvard Square is the Rooney Building. James Rooney originally operated his shoe business in the remodeled Baptist Church. In the early 1870s, he purchased the land between Kent and Andem Place, and in 1876 erected the ‘Gothic’ brick building along with the other buildings in the photograph. As the picture shows, only the first floor of the Rooney building has Undergone major alterations. On the second floor, for example, there are sharply pointed brick lintels intermixed with projecting diamond shaped brickwork. on one window the initial ‘R’ is carved into the sandstone, presumably at the request of Mr. Rooney. On the third floor are simpler arched windows, with vertical brick patterning under the sills. Finally, the top floor windows have only sandstone sills and lintels with rows of tar-dipped bricks that provide decorative accentuation to the facade. 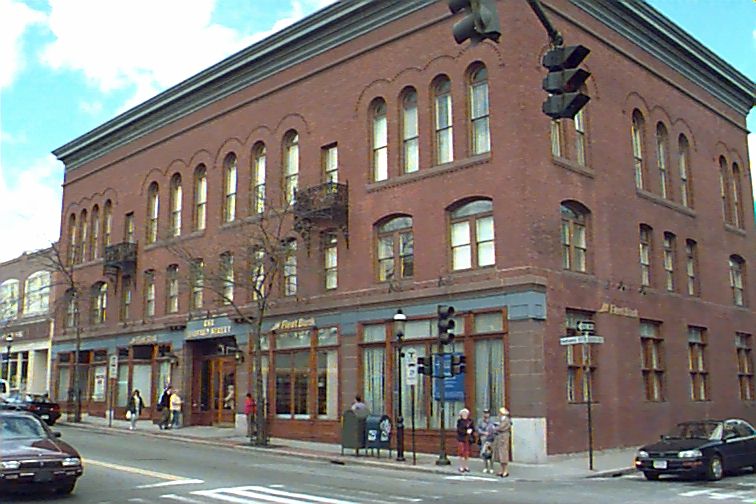 In contrast to the whimsical detailing of the Rooney Building is the Trust building. A fine complement to 256 Washington Street, it too has segmental arches above grouped windows. Again there are the radiating bricks which provide particularly attractive detailing on the elongated third floor windows. Also note the dentilled cornice, suggesting the classical influences of the 1890s. The history of this building also deserves comment. Organized in 1886, the operations of the Brookline National Bank remained in the ‘Reubens’ until 1893 when its increased business necessitated larger facilities. As a result a lease was taken in this recently completed structure at the corner of Kent and Harvard streets. Known as the Lowe Building, it was constructed in 1893 by the heirs of Abraham T. Lowe. The Brookline National Bank continued to rent until 1902 when the institution purchased the building and commissioned the architects Peabody and Stearns to prepare plans for extensive alterations. The roof was lifted about 8 feet and a cornice of heavy galvanized iron was added. The plans also included a granite facade on the first floor which has, in turn, been resurfaced with the present marble treatment. When the renovation was completed, the Riverdale Press (including The Chronicle) and the Masonic Lodge were among the first tenants.