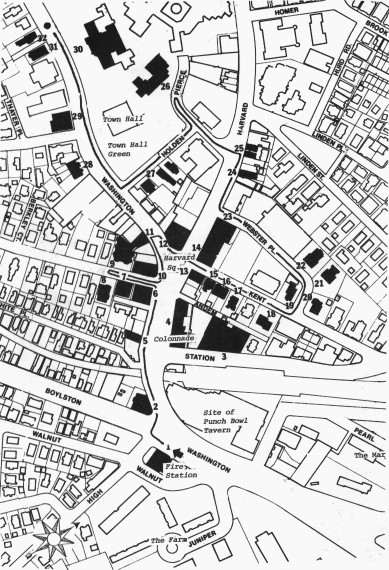 The walking tour of the Village begins at the Hearthstone Plaza, the former site of the Punch Bowl Tavern. The early development of the Village was centered around this well-known tavern which served ‘refreshments for man or beast.’ Strategically located, all wagons and stagecoaches travelling to Boston from the west or north passed by this popular inn. Indeed, the Punch Bowl Tavern was so associated with the Town during the eighteenth and early nineteenth century that many travelers simply referred to the community as ‘Punch Bowl Village.’ However, with the construction of the Mill Dam in 1821 (Brookline Avenue), new bridges to Boston, and the opening of the Worcester Railroad, the Punch Bowl Tavern ceased to be the Town’s nucleus. The tavern was razed in 1833, and a variety of local businesses and residences soon dotted both sides of Washington Street. Most of these remained until the 1960s when renewal efforts prepared the way for the present development.