Pony rides 4:15-5:15
Grills fired up at 4:30
Grills and condiments will be providedBring your own grill-ables, BYOB, and a side dish to shareWater/drinks and hot dogs will be provided for the childrenAn ice cream truck will take care of dessert
BYO yard games welcome!

The weather forecast looks cooperative so no need for a rain date.
Hope to see you all on the green! 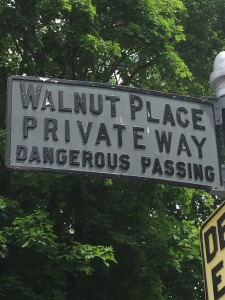 Street signs are such an important part of the visual environment, and many neighbors have noticed how some Pill Hill street signs are made of thick cast aluminum with projecting black letters on round poles, while others are flat computer-generated versions on perforated square towers. The distinctive black and silver cast signs were crafted by local workers at a town foundry from 1937 through the 1960s. In recent years, however, their numbers have been diminished by natural attrition — car accidents, tree limbs, and theft; High Street, for whatever reason, seems to be a frequent target. The old signs have generally been replaced with mass-produced modern ones. The federal government also played a role in the demise of Brookline’s homemade signs, which appear to be unique in the United States.

A 2003 federal guideline stipulated that by 2012 all street signs were required to have six-inch letters, be retro-reflective, and on breakaway poles. In spite of this new regulation, a town warrant article in 2005 sought to maintain in place the existing cast aluminum street signs and restore missing ones. This well-intended article, however, wasn’t always respected when replacing the missing historic signs. A significant breakthrough came in 2012 when the High Street Hill Association, the Brookline Preservation Commission, Senator John Kerry and several other Northeast communities successfully lobbied for historic districts to be exempt from federal street sign requirements.

The High Street Hill Association received good news this spring after campaigning for over fifteen years to preserve and replace Pill Hill’s historic street signs. We were notified by the town that the specifications and documents required to restore all of the neighborhood’s missing historic signs and poles were nearly complete. This is not a small project. A 2015 High Street Hill Association inventory found that over half of them were missing. A date has not been set when the new historic signs and poles will begin appearing in our neighborhood. In the meantime, visit the HSHA website’s Neighborhood History for photos and a history of Brookline’s classic black and silver cast aluminum street signs.